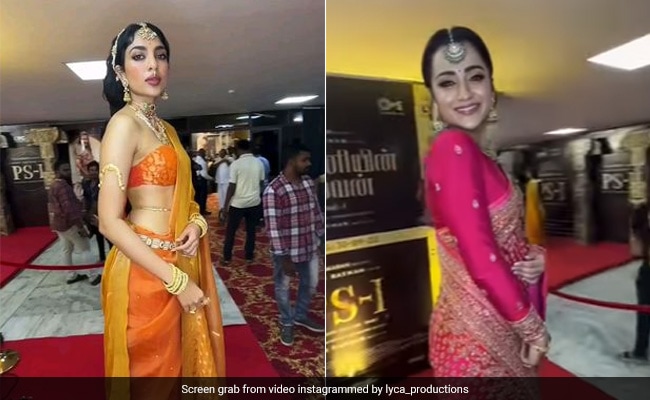 Sobhita and Trisha on the red carpet. (courtesy: lyca_productions)

The grand trailer launch of Mani Ratnam’s Ponniyin Selvan is taking place in Chennai tonight and it is a star studded-affair. While the biggest stars of the night – Rajinikanth and Kamal Haasan are yet to make an appearance, the red carpet is already dazzling with stars and how. Ponniyin Selvan star Trisha, who plays Princess Kundavai, walked the red carpet in a pink saree and she looked stunning as ever. Sobhita Dhulipala, who stars as Vaanathi in Mani Ratnam’s film, walked the red carpet in a yellow and gold ensemble, looking pretty as ever. Jayam Ravi, who plays the titular role, arrived the venue in a cream outfit.

Aishwarya Lekshmi, who stars as Poonguzhali, made her red carpet appearance count and how.

Karthhi, who plays the role of Vallavaraiyan Vandiyadevan in Mani Ratnam’s magnum opus, was dressed perfectly for the occasion.

Aditi Rao Hydari also attended the launch, dressed in a pink saree. She happily posed for the cameras on the red carpet.

A picture of superstar Vikram from the event. Need we say more?

Not a red carpet picture per say but a direct one from the grand launch itself – Mani Ratnam with wife Suhasini.

Ahead of the red carpet, a glimpse of the stage was shared by Lyca Productions’ official Instagram handle.

Produced by Lyca Productions, the first part of magnum opus Ponniyin Selvan will hit the theatres on September 30 this year in five languages – Tamil, Hindi, Telugu, Malayalam and Kannada.