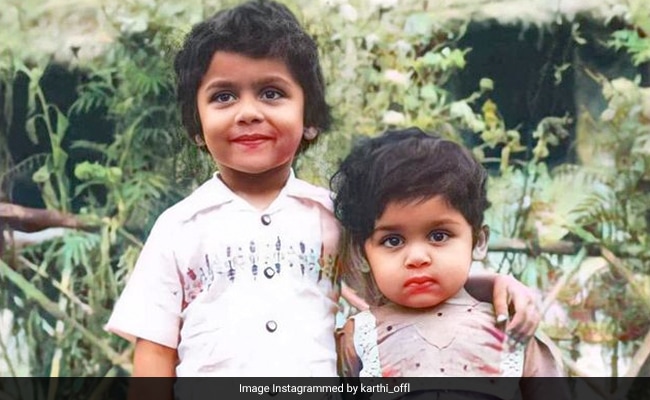 A throwback of Suriya and Karthi. (courtesy: karthi_offl)

Suriya completed 25 years in films on Tuesday and to mark the milestone, his brother and actor Karthi shared a precious throwback picture from their childhood days and adorable can’t even begin to describe it. Karthi accompanied the note along with the hashtag #25YearsOfCultSuriyaism and he wrote in his caption: “He worked day and night to make his every minus into his greatest plus. He focused only at outperforming his own achievements. As a person, he made his already generous heart even larger and shaped the lives of thousands of deserving kids. That’s my brother.”

Here’s what Karthi posted for Suriya:

Meanwhile, Suriya shared this post on completing 25 years in films and he wrote: “Truly a beautiful and blessed 25years..! Dream and believe… Your Suriya.”

Truly a beautiful and blessed 25years..! Dream and believe..!
Your suriya.

Suriya made his acting debut with Nerrukku Ner. He went on to deliver hits such as Nandha, Kaakha Kaakha, Ghajini and the Singam trilogy. In the recent years, he starred in the critically acclaimed Soorarai Pottru and Jai Bhim. He also had a cameo in Kamal Haasan’s Vikram and Madhavan’s Rocketry: The Nambi Effect. He will also have a cameo appearance in the Hindi version of Soorarai Pottru, featuring Akshay Kumar in the lead role.

Earlier this year, Suriya won the Best Actor National Award for his performance in Soorarai Pottru. He is also among the 397 film personalities invited to join the Academy of Motion Picture Arts and Sciences for the 95th Academy Awards.