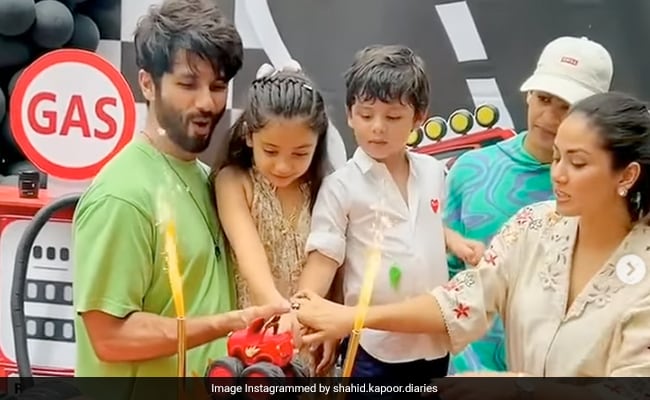 Shahid Kapoor and Mira Rajput’s son Zain turned 4 on Monday. A day later, pictures from his birthday festivities are trending on social media. Several fan pages dedicated to Shahid Kapoor have shared videos and pictures from Zain’s birthday festivities. In one of the videos, the little one can be seen cutting his birthday cake with his dad Shahid, mom Mira and sister Misha by his side. The video is just too cute. Shahid Kapoor married Mira Rajput in July in 2015. Their daughter Misha was born a year later in August. Shahid and Mira are also parents to a son named Zain, who they welcomed in the year 2018.

See the photos and videos from Zain’s birthday festivities here:

On Zain’s birthday, Mira Rajput shared a super cute picture of Zain and she wrote in the caption: “Gentle eyes with a naughty smile, warmest hugs and sweetest frowns, no one else makes my heart melt the way you do. Happy 4 my darling Zain! We love you.” In the comments section of Mira’s post, her mother-in-law Neliima Azeem wrote: “My darling tiny tot Zi thank you for bringing so much sweetness in our lives. You are the cutest. Love you more every minute.” In a separate comment, she wrote: “Many, many happy returns of the day my naughtyyyy 4.”

On the work front, Shahid Kapoor  was last seen in Jersey, in which he played the role of a cricketer. The original film was made in Telugu and it stars Nani in the lead role. It received the National Film Award for Best Feature Film in Telugu and the National Film Award for Best Editing. His next project is Raj and DK’s Farzi.

Shahid Kapoor is best-known for his performances in films such as Udta Punjab, Haider, Jab We Met, “Padmaavat” and Ishq Vishk and the 2019 hit Kabir Singh, co-starring Kiara Advani, to name a few.