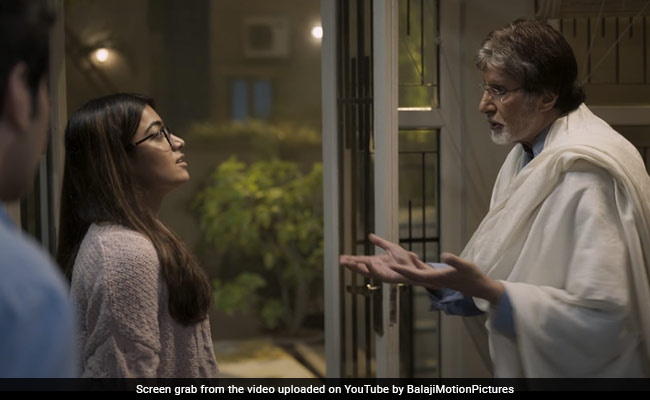 The trailer of Goodbye released on Tuesday morning and the perfect way to describe it would be to call it a cauldron of emotions – there is grief, love, logic, tradition and a hint of humour. The trailer begins with Rashmika Mandanna’s character telling her parents (played by veterans Amitabh Bachchan and Neena Gupta) that she wishes to step out of her house to be independent. An argument later, Rashmika answers the doorbell only to learn that her mother has died. When Rashmika makes her way home, she and her father (Big B) are tangled in a constant battle of logic vs tradition. While Rashmika questions every ritual, explaining how her her mom always wanted to be cremated a certain way and that she wanted to be a free soul. Amitabh Bachchan sides with age-old societal norms. Questioning his daughter where her “logic” was when she did not answer the phone for two days.

The trailer finds elements of comic relief in the form of Sunil Grover, who simply stated that good memories have no logic. Pavail Gulati finds himself on the receiving end of hilarious one-liners immaculately delivered by his father (played by Amitabh Bachchan). Elli AvRam, who plays Pavail’s love interest finds herself lost in the cultural differences ( you’ll know when you see the trailer). All in all, Goodbye trailer will make you smile and shed a tear or two at the same time.

Check out the trailer of Goodbye here:

Sharing the trailer of the film, Rashmika Mandanna wrote in her social media post: “A part of our Goodbye baby is now yours… This one is special for so many reasons but for now I hope you and your family like this.”

Before the trailer’s release, Rashmika shared a few posters from the film. “Meet my crazy little family,” she captioned this one.