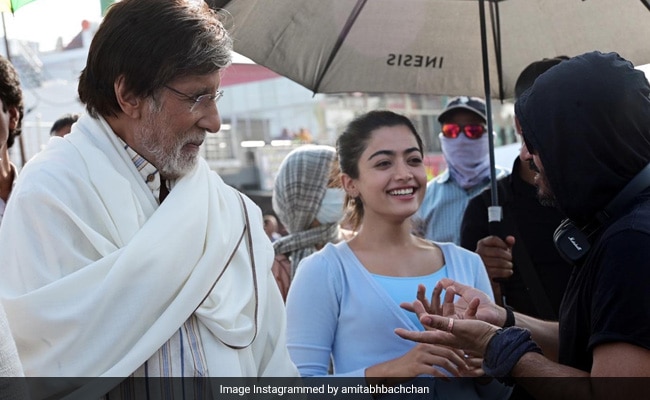 Big B with Rashmika. (courtesy: amitabhbachchan)

Rashmika Mandanna, who is all set for her big Bollywood debut with Goodbye, co-starring Amitabh Bachchan, Neena Gupta and Pavail Gulati, shared her experience of working with Big B during the film’s trailer launch in Mumbai on Tuesday. Big B, who recently recovered from Covid-19, was MIA from the event. However, he did join the film’s team via video call. Rashmika recalled meeting the legend for the first time and said, “I was standing and waiting for him, and Sir just walked in, crossed me and went. So I was like, ‘ok, not now. This is not the time’ because I was standing there, flashing a big smile… I thought he was thinking about the scene,” news agency PTI quoted Rashmika as saying. Rashmika added, “Then I went to him and told him, ‘Hi sir, I am Rashmika and I will be playing your daughter’. I was so nervous, it is such a huge responsibility working with such big actors. It is just good to get each other’s energy on the first day.”

The Pushpa star added, “He was so strict, sitting there and then we started having a banter like a father and a daughter. Our relationship got closer and closer throughout the making of the film. He is a beautiful person, so I’m just happy that I got to see his side while working with him,” PTI quoted Rashmika as saying.

Rashmika Mandanna began her career as a model for a commercial, from where the makers of Kirik Party selected her for the lead role opposite Rakshit Shetty. After the success of her debut film, Rashmika signed Harsha’s AnjaniPutra opposite late actor Puneeth Rajkumar and Chamak opposite Ganesh. She also featured in Sarileru Neekevvaru, with Mahesh Babu. Her filmography also includes Geetha Govindam and Dear Comrade with Vijay Deverakonda. She was last seen in Pushpa: The Rise, co-starring Allu Arjun and Fahadh Faasil, which was a big hit.

(With inputs from PTI)